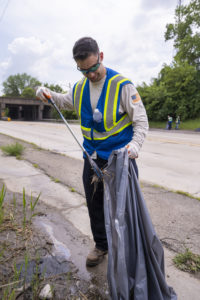 The Detroit refinery and Michigan Department of Transportation (MDOT) have partnered to create a cleaner community for the residents around the refinery in a new project that kicked off this past April. Throughout the summer, refinery employees are volunteering every second and fourth Wednesday to clean up trash around the I-75 and Schaefer Highway interchange, as well as the surrounding areas. Additionally, volunteers plan to participate in a fence line clean-up in June and August to remove litter along the border of the refinery.

More than 30 Marathon Petroleum employees signed up to volunteer in District 6 for this year’s Motor City Makeover. Volunteers focused their efforts on promoting safe routes to the Mark Twain School for Scholars and a clean business corridor along Fort Street. Volunteers cleared trash from six lots (including two across the street from the school), cut down brush and trees along major walkways, and removed garbage from the Fort Street median. The cleaning was in response to requests by community members. The refinery looks forward to continuing the tradition of partnering with the city for this event for years to come!