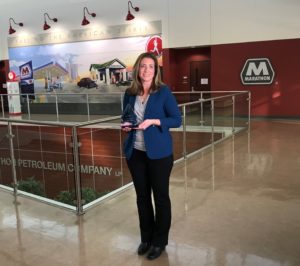 by the Michigan Manufacturers Association.

The MFG Excellence Awards is an annual ceremony that celebrates the exceptional contributions that Michigan manufacturers make to their workforces, communities, the economy and the industry.

“Honor is essential in helping drive the culture and commitment to operational excellence at the Detroit Refinery. She spends a lot of time out in the field working with the team that keeps things running daily,” said Detroit refinery general manager Dave Leaver. “She inspires us all to work harder and be the best we can be.”

Sheard makes supporting her team a top priority. She has assisted five other women in navigating their first supervisory positions by supporting them professionally and boosting their confidence.

“As a female leader in a male-dominated industry, everything I do is magnified,” said Sheard,. “My words and actions are used strategically to create the expectations for future female leaders.”

She actively offers women throughout the organization to share their thoughts and opinions. Sheard worked to create the refinery’s first Women’s Unity Network as the leadership sponsor.  The network breaks down barriers and educates women on how to shake off the “imposter syndrome,” which causes them to feel that they are not as competent as they are perceived by others. Members are encouraged to understand and value their hard work and worth within the company. Sheard sparks discussion and encourages female leadership by hosting discussions on articles, pay practices, philanthropy and diversity seminars that can assist women at the refinery to establish and achieve their career goals.

“As a female who transitioned from one predominately male profession to another, Honor is a role model, mentor and supporter of females,” said Detroit refinery security coordinator and member of the Women’s Unity Network Whitney Walton. “She is a sponsor and advocate of our Women’s Network at the refinery and a personal champion for me.”

Sheard leads several environmental and safety initiatives at the refinery.  She considers environmental advocacy to be central to her role, aligning directly with MPC’s commitment to produce petroleum-based products with minimal environmental impact and well within the parameters of all state and federal regulations.

In the 20 years she has worked for MPC, her passion and commitment have supported a nearly 80 percent reduction in emissions at the Detroit refinery. Sheard played a critical role in the refinery’s accomplishment of one full year without either an employee or contractor OSHA recordable injury; a difficult feat at manufacturing facilities. Her team also implemented an easy-to-use QR code system that allows all employees and contractors to report Near Miss Events, which are potential hazards detected and corrected before anyone is harmed. This system immediately notifies supervision and area owners so they can quickly alleviate potential hazards. This program was instrumental in creating a safe work environment and empowers employees at all levels to speak up when they notice issues.